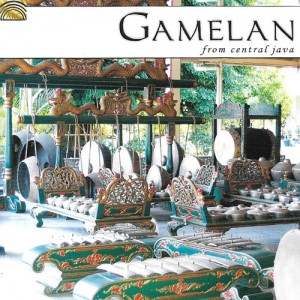 I have little to add to other reviewers. It is extremely difficult to be a prophet – the great musician, theoretician and a teacher A. Schoenberg foretold (in 1910’s) the future music evolution, and of course it went wrong – he did not anticipate many phenomena, like the rise of minimalism. He also claimed that the highest point of development of a more primitive culture does not match the mediocre manifestations of a much more sophisticated culture. Even Bartok was well aware of a huge delusion in this claim; now everybody knows that it is an error, an obvious one.

For a listener used to interval leaps in R. Strauss and R. Wagner the track 2 of this CD is a mystery – how it happened in Indonesia? Where these amazing intervals come from? In the West it did not happen up to the 19th century! Yes, two scales in gamelan (pelog and slendro) in the West may be classified as microtonal. But abstract microtonal music without a cultural background or at least a narrative is just a music, while gamelan has pathos, fatality, beauty – everything that is present in archaic folk music. Anyway, I have not told anything new – this is just the same impression the West musician gets after an encounter with the gamelan.

…This recording by John Noise Manis gives a good overview of central Javanese musical fare. …What is especially delightful on this CD is the last track, a 14+ minute composition for Javanese (and other) instruments and voices by Joko Purwanto.

… This is an idiosyncratic introductory survey of the Javanese gamelan… The tracks here were recorded in Java and also in Italy and England.

… Lebaran (1989) by Javanese composer Joko Purwanto is presented as an example of a contemporary gamelan composition. It is a lively and boundary-stretching work which receives a convincing performance, a fitting tribute to both its Javanese composer and to Dr. Neil Sorrell, the director of the University of York group featured here, who is a pioneer of gamelan in England.

This album is somebody’s labor of love, though it’s not entirely clear from the credits whose.

The variety of styles presented should give this disc extra points with new listeners to the genre.

An introduction to Javanese gamelan music could start with a question: why isn’t this rich and fascinating sound culture more known and appreciated among music lovers?