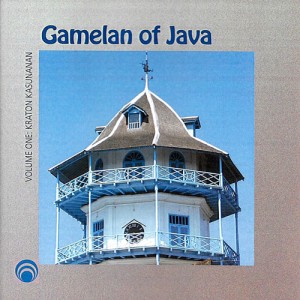 These Lyrichord discs continue a pattern that Yantra Productions has established with other gamelan CDs that have been released through other labels: they are recorded clearly, present well-performed renditions of interesting repertory, and show evidence of a knowledgeable, if sometimes heavy-handed, approach to curation.

…Sumarsam’s contribution for Volume One first provides informative historical notes about the heirloom gamelan from the Kraton Surakarta. He then identifies two unusual aesthetic decisions that John Noise Manis made for this volume. First, Sumarsam tells us, a klenengan (gamelan concert) would not likely include two gendhing bonang… Second, Sumarsam continues, John Noise Manis instructed the musicians to leave out one of the instrumental parts – that played on the peking, the highest-pitched metallophone – to thin the gamelan’s texture and offer a ‘clearer sound’. [*]

[* After the performance one musician admitted that it sounded better without. The peking of gamelan Kyai Kaduk Manis is particularly shrill. A performance of ‘Babar Layar’ made a previous year was not released because of the untameable voice of the instrument – JNM]

Gamelan of Java is a new series from John Noise Manis, who produced the landmark series, Gamelan of Central Java. Volume I features two gamelan from the court of Surakarta, the Kyai Kaduk Manis, the pelog (seven tone) instruments, with Manis Rengga, the slendro (five tone) instruments; and the slendro Kyai Lokananta, an historic gamelan dating to the eighteenth century. They present two genres of gamelan, gendhing bonang, performed by the Kyai Kaduk Manis/Manis Rengga ensembles, and gendhing bedhaya-serimpi, peformed by Kyai Lokananta.

This is court music, remember, from Surakarta, a tradition noted for its delicacy and sophistication.

John Noise Manis (manis is javanese for sweet) is now the man behind a new series on Lyrichord. This opening trio of CDs gets things off to a strong start. The programming is a bit idiosyncratic, with two of the discs being near-identical twins, but the tracks include some of the best recordings of Javanese gamelan out there. …The first volume gets an extra star because the ketawang has an awesome choral vocal that calls to mind Sun Ra’s cosmic jazz.

Born in East Java, Bapak Sumarsam received formal gamelan education and grew up as musician in Surakarta (Central Java). He is Adjunct Professor and former Chair of the Music Department at Wesleyan University (Middletown, Conn) and an internationally renowned gamelan musician.