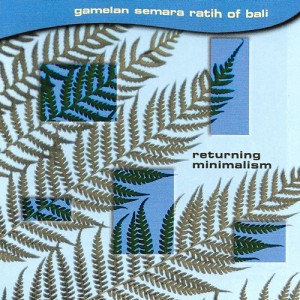 This ambitious album is the third in the series titled “Returning Minimalism.” In each, the creative challenge posed by Noise Manis to indigenous performers: find your inner, culturally appropriate In C.
He’s certainly not been the first to employ cross-cultural approaches to exploring music he loves. As the musicologist Kyle Gann has written, “minimalism [can be seen as] an irruption of non-Western influences into the Western tradition – even, American music’s attempt to connect with the rest of the world.” More pointedly however: did gamelan music somehow exert a substantive influence on early minimalism? There’s no evidence for this. To the contrary in 2011 Terry Riley stated that in the early 1960s when he created his early minimalist works, “the fact is that I didn’t know about gamelan.”

Regardless of shifting perceived patterns of cross-cultural influence the ongoing Returning Minimalism project argues for the important work of contesting stereotypical Western exoticist readings of culture. In this album the project has put a seminal musical composition, which at its birth shook up norms of classical Western music, into the hands of Balinese composers and musicians.
Guided by the seasoned American gamelan musician Ken Worthy, in their adaptive explorations of In C the 23 musicians of GSR are heard in two works on this ear-opening album. They form an attractive unforced-sounding hybrid reflecting both their Balinese and minimalist sources with clarity while not compromising either. On track one, In Deung – Vibration of the Spirit, melodic cells from In C are transposed into the seven-tone tuning of the GSR gamelan evoking an introspective mood representing “the spirit centred in the self.” By way of contrast the more lively In Dang – Teruna’s Dream reworks In C motifs and skilfully weaves into the fabric occasional quotations from Teruna Jaya (Victorious Youth), the influential early 20th-century North Balinese masterwork.

This marvellous music helps us deepen our understanding and enjoyment of such masterfully made multiple redirections in the flow of trans-cultural influences.

Terry Riley rarely explored the ideas of gamelan in his music, due in large part to his deep engagement with Indian classical music. But in ‘In Deung’, a piece modelled on the methods Riley outlined in ‘In C’, his cyclical pulse motifs sound utterly at home in the hands of longstanding Balinese ensemble Gamelan Semara Ratih. The semi-improvised nature of the music is something of a stretch for musicians firmly rooted in strictly delineated structures, but that challenge is convincingly met as patterns naturally phase in and out of sync, and the orchestra intuitively moves through alternating periods of louder and quieter attack. In the second of these two 20 minute pieces, ‘In Dang’, the Balinese musicians foray even deeper into improvisation, forging a spontaneous suite of overlapping tempi and timbres with sudden swells of volume, interlocking clockwork rhythms and flickering rings. In places it sounds almost as if Gamelan Semara Ratih are attempting to channel the hyper-complex electronica of Autechre through bronze and wood. Now there is an idea.

The man behind the concept that links these two releases is the magnificently named John Noise Manis [no doubt a nom de guerre but still a good one]. It was his idea to see what contemporary American compositions sounded like when performed by gamelan orchestras. Thanks to the highly detailed and studious sleevenotes on both these releases I now know that the biggest obstacle facing  anyone trying to teach a gamelan orchestra how to play works of a western nature is that gamelan players follow no musical notation, let alone a western one. There does exist a notation system for gamelan but this is used mainly to archive works and isn’t used for performances, tradition dictates that gamelan orchestras rely on an oral tradition and the skill and memory of the player to continue the tradition [I include this information to keep pedants from my door].

‘Returning Minimalism’ sees Terry Riley’s ‘In C’ used as a working model for  further exploration and improvisation. Using 23 musicians [au natural] these two 25 minute tracks evolve through many states of tempo and mood closing a circle that began with Riley’s own influence through gamelan. Its a neat circle to square.

Billed as ‘Artistic Coordinator’, Ken Worthy, again with many detailed booklet notes, describes the process and the build up to the recording process, involving as it does reliance on the weather and the blessings of priests. Then there’s his realization that these recordings may be even more radical than Riley’s 60’s composition seeing as how these musicians are having to grapple with a structure that, even though it may create a sound similar to ‘In C’, is in fact far removed from it.

Its the interplay of overlapping instruments and the freedom of expression that bring these two works to life. ‘In Deung’ is the more contemplative of the two pieces, ‘In Dang’ a more explosive piece thanks to the use of heavy wooden mallets and vocal shouts [designed to scare away malevolent spirits] but both contain passages of tranquil beauty, quiet moments of flute and gently struck keys which reveal insect chatter and through it the true nature of these outdoor recordings.

What interested me most during my time here was the sheer depth of instrumentation available to a gamelan orchestra and the myriad ways in which their instruments can be tuned and set up. No two gamelan orchestras sound alike either. Its no surprise they drew the attention of people like Debussy, Cage, Riley, Reich, Glass, La Monte Young and lets not forget the Sun City Girls. Its a list that will continue to grow and so it should.

Idwal Fisher Blog – an antimacassar for the hearing

As I flew into Bali on the afternoon of July 4, 2012, the holy mountain Gunung Agung rose majestically above a thick blanket of clouds, greeting visitors as it often does, like a beacon announcing that something extraordinary lies below—the visual equivalent of a gong stroke.