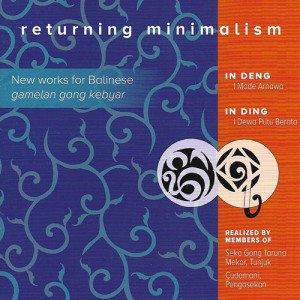 In Deng (I Made Arnawa)

I Made Arnawa and I Dewa Putu Berata are two musicians that make up the Seka Gong Taruna Mekar and Cudamani Ensembles from Bali, Indonesia. Returning Minimalism… is an extension of Terry Riley’s 1964 work, “In C”, a pivotal piece–and arguably the first minimalist composition.
Track one, “In Deng,” by I Made Arnawa, is a twenty-four minute composition that includes gamelan instruments, such as reong, trompong, gangsa, suling, jublag, jegogan, gong, kempur, and kenong. The metallic overtones are arranged in a fast-paced rhythm with shimmering gamelan sounds that mimic a metal balafon or vibraphone with starkly, higher-pitched sounds. The music is instrumental and it takes on a new approach to performance, since the album accentuates improvisational and creative energies that defy traditional modes. “In Ding” is the second and final track, but it is performed by I Dewa Putu Berata. This track was mostly instrumental, except for vocal accompaniment by Emiko Saraswati Susilo. “In Ding” was more improvisationala range of one tone. The crystal clear tones of the gamelan instruments are iconic, trance-inducing, and meditative. The music is ideal for Balinese musical studies and graduate students with a background in musical notation. Extensive liner notes are included in English.

A bird sings and insects hum in the background. A metallophone begins playing a rapid three-beat pattern. Another, played with soft beaters and sounding like singing bowls, joins in, and then another, and another. Three-quarters of an hour later, the last instrument fades and the wildlife takes over again. And, as hypnotists say, you are back in the room. In ‘Returning Minimalism’, a group of Balinese musicians take the idea of Terry Riley’s ‘In C’ – a web of melodic fragments that the players develop on the hoof – and apply it to the bronze percussion of their own gamelan gong kebyar. It’s the companion to a disc of Javanese gamelan (reviewed in #79), but the new album is better, perhaps because the fierce, bright Balinese instruments adapt to the concept more easily than the restrained Javanese gamelan.
The disc has two long tracks. The first, ‘In Deng’, is the floor-filler – it builds and builds, instruments tinkering with the theme while gongs shift the harmonic foundations. ‘In Ding’ is the comedown, slower, sadder, more criptic and prowling. They are both great. The music highlights the differences between gamelan and minimalism as much as the similarities. Gong kebyar is a firework display that piles up spectacular effects; minimalist music is like gazing into the flames of a fire – it’s always the same but always different. This falls somewhere in the middle; the Western composer it most recalls is John Adams, with his lush and romantic take on minimalism.

The pura dalem temple of Tunjuk, a small village in Bali’s western Tabanan district, is serenely beautiful. Far from the main village streets and reachable only by a narrow access road or footpaths, this temple—it’s full name is the Pura Dalem Munduk Sangkur—is shaded by tall palm and luxuriant hardwood trees, nestled like an oasis among broad rice fields. Like most Balinese temples, it is an open array of interlinked courtyards, laid out in a design carefully proportioned to fit the temple’s character, history, and spiritual intent.