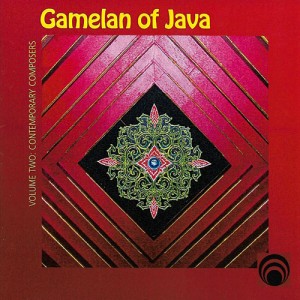 The second CD in the Lyrichord series represents a very different approach. John Noise Manis commissioned six faculty composers from Institut Seni Indonesia (ISI) in Surakarta to create new works. The composers all have extensive training in traditional music as well as experience studying and teaching abroad. They bring wide-ranging perspectives to their pieces, and the results show evidence of Western avant-garde thinking applied to Javanese forms and processes, as well as a combination of composer-as-dictator and a more Javanese collaborative approach to creating music. Each composer has contributed notes about his composition for the liner notes.

Contemporary Composers, offers six works by six contemporary musicians. What may seem odd to Westerners is that the musicians, according to Manis’ brief introduction, worked together as a group, although each work is identified as having been created by one of them. (Perhaps it’s not so odd: when one considers the origins of much of our popular music, particularly jazz and rock, the first form of a song often bears little resemblance to what we hear in concert or on a recording, when each member of the band has made a contribution.)

Aloysius Suwardi’s offering, ‘Sindhen Kewek’ (which translates as “flirtatious singer”), combines two genres of gamelan music, jineman, a traditional genre that forms the basis for the instrumental part, and langgam, which forms the basis of the vocals. It’s a combination that provides a good deal of dramatic tension in the piece, supported by a strong momentum that carries throughout. I remember on first hearing, I could feel myself smiling — it’s that kind of music.

‘Tengoro’, by Darno Kartawi, reflects village life, specifically based on the composer’s childhood in a village on the border between Banyumas (central Java) and Sunda (western Java). It’s a tremendously evocative piece of music, giving a real sense of the energy of village life.

Joko Purwanto’s ‘Waktu dan Ruang’ (“Time and Space”) uses the elements of the title to structure a highly abstract piece of music in which the instruments fill in the gaps in each other’s parts, sometimes competing with each other, sometimes complementing each other. Conceptually, if not in any other way, the piece reminds me of Morton Feldman’s ‘Rothko Chapel’ — it has that same sense of sound and silence occupying and defining space.

The title ‘Ukelan’, composed by Prasadiyanto, refers to a style of playing in which the left hand and right hand move at different speeds. The music that results from the composer’s use of this technique provides a complex and engaging work.

Sri Harta’s ‘Puthut Gelut’ also makes use of patterns to build a piece of music. The composer notes that the idea of competition is once again central to the composition — “puthut” means “power” or “strength” and “gelut” is “to fight”. The opening passages give a sense of the music poised on the brink, which soon gives way to a complex, highly textured work, in which the vocals and the instrumentals weave through and around each other to build a rich tapestry of sound.

The final selection, Supardi’s ‘Papat’ is based on four notes of the slendro scale, using the patterns thus derived to build strong momentum. Interestingly enough, this one strikes these Western ears as perhaps the most traditional of the selections on this disc. It is also quite intense, almost reaching the driven quality of Balinese gamelan.

This new series from Lyrichord is a welcome addition to my ever-growing library of gamelan. The notes, while somewhat technical, are very informative and, particularly in Volume II, give us insights into the music from the creators themselves.

Volume Two which features contemporary composers is very different , departing from the instruments and forms of classical Javanese music to fine effect. For example, Sindhen Kewek by Aloysius Suwardi takes an ensemble of massed plucked stringed instruments and singers and creates something thrillingly atmospheric, like a Javanese Portishead. Tengoro by Darno Kartawi, on the other hand, backs its wailing singers with chugging bamboo percussion to create something that sounds like Krautrock. This is terrific  music that deserves to find an audience beyond the gamelan getto.

Six compositions by six musicians, all faculty members of ISI (Institut Seni Indonesia), Surakarta. The creations, each less than ten-minute long, are the result of a commision that I proposed to the musicians. They operated as an artistic group, benefiting from the consequent synergies of the situation. Joko Purwanto acted as a coordinator, and he has to be thanked for this role.