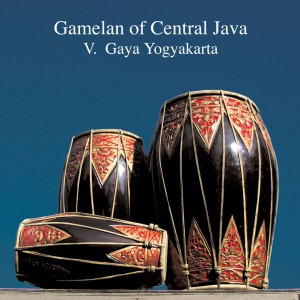 The ambience of uyon-uyon (gamelan performance for listening pleasure) Monosuko is captured in this CD release by producer John Noise Manis, the fifth in his series of recordings of central Javanese gamelan music on the Felmay label. Monosuko is a decades old “listeners’ request” tradition of radio broadcasts of gamelan music by the studio musicians of the Yogyakarta branch of the Radio Republik Indonesia.

…. Much valuable and accurate historical and stylistic information is presented in the notes by Hardja Susilo, the guru of many non-Javanese students of gamelan, including this reviewer.

…. Tracks 1, 3, and 5 of this CD contain performances excerpted from a typical two-hour Monosuko broadcast. Tracks 3 and 5 are severely edited versions of lengthy performances made by the CD’s producer that “reflect [his] own (Western biased) aesthetics” (liner notes).

…. The most endearing part of any Monosuko broadcast for the audience is the playful “Pangkur Jenggleng” set, in which a comedian and his/her sidekick verbally spar with one another and the musicians in the studio while performing a highly fragmented and idiosyncratic rendition of ladrang “Pangkur”. This set can easily stretch out to over half an hour, with well over half of the time being taken up with improvised dialog. So it is understandable that, for a commercial CD release focusing on music and intended for a non-Javanese audience, a producer would extract an abridged version out of a full “Pangkur Jenggleng” performance.

…. Performances of two classic gendhing bonang are included on this CD: “Undhuk” (Track 2) and “Tukung” (Track 4). Both performances are complete and well performed. The performers utilize in their realizations of these pieces distinctively Yogyanese musical treatments and resources, such as Yogyanese kendhangan (drum patterns), the large bonang panembung gong-chime, and the anticipating style of peking metallophone playing. Gendhing bonang are not the type of repertoire typically performed at the radio station, and they are seldom if ever heard on uyon-uyon Monosuko broadcasts (even though the producer informs the listener that these selections were independently recorded, their placement on the CD between material from a Monosuko broadcast invites the listener to think of them as components of such a broadcast). ….If only one of these had been included in this CD, the eighteen minutes saved could have been distributed between the two severely edited Monosuko sets, possibly resulting in abridgements more sensitive to Javanese performance practices.

The disc offers plenty of orchestral variety, including solo male and female vocalists, choral singing, bowed and plucked strings, end-blown flutes, and even some dialogue as the musicians joke with each other during the broadcast. The liner notes include an insightful interview with a Yogya-based master musician, Bapak Hardja Susilo, who succintly puts Javanese performance practice into perspective. For example, he notes that ‘classical’ gamelan works are ever changing, and no two professional ensembles will play the same piece the same way. Despite the fact that some of the pieces have been around for centuries, it’s a living, contemporary music.

…. These discs look and sound great, and producer Manis has done a great job of keeping the project as informative as it is fun to listen to. Although gamelan enthusiasts will want to add these recordings to their library, they’re also recommended to non-specialists who want to stretch their ears and imaginations in a new direction and hear some of the deepest music on the planet.

…. So, what about the music itself?  In a word: gorgeous.   Bapak Hardja Susilo, in the interview included with the Yogyakarta volume, notes that Balinese gamelan possesses a sense of urgency, “one which requires our immediate attention”. The Javanese works in this group are much more relaxed, more introspective, and very seductive. Strangely enough, the image that came to mind while listening to these selections was strikingly similar to that engendered by Morton Feldman’s  “Why Patterns?”: the verge of a forest after rainfall, save that in the case of the Javanese works, it was a tropical rainforest.  (Another comment, perhaps, on the universality of music: radically different formal and intellectual traditions giving rise to the same reaction – with local variations, of course.)

The CD series curated by John Noise Manis (kind of a suspicious name – isn’t  ‘manis’  Indonesian for sweet?) moves in for a closer look at the Yogya style, played by the local radio musicians. It’s a bold, hard-hitting music that begins at a snail’s pace and eventually builds to an exciting, accelerando final lap. In a sleevenote interview, venerable luminary Pak Sus declares Yogya music to be elegant and majestic, which well describes the 20 minute gong fest “Unduk”. The lighter side of Yogya life is heard in the comic song “Pangkur Jenggleng”. Humorous dialogue pokes fun at listeners who fall asleep during the performance. “Jenggleng” is the clonk as two train cars are connected, waking drowsy passengers.

To illustrate the music included in the present CD, we had the opportunity of calling upon one of the world-renowned Javanese musicians, Bapak Hardja Susilo. Pak Sus, as he is affectionately called in the international gamelan community, was born in Yogyakarta on December 3, 1934, at kampung Gedhong Tengen.