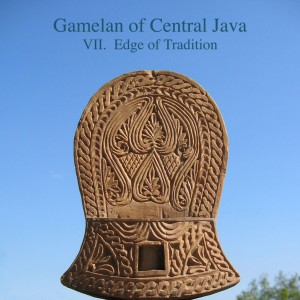 Subtitled “Edge of Tradition”, this CD does indeed include two selections that are “out there” in the sense that they would seldom if ever be heard in common practice.

…. The CD opens with a tri-sectional work titled “Parisuka” (Enjoy) by the late gamelan master R. Ng. Martopangrawit. The work begins and concludes with a lilting song set to a twelve-beat gong phrase with a triple meter feel, unheard of in common gamelan practice but experimented with by a few Javanese composers during the 20th century.

…. The experimental nature of the second selection on this CD is centered in its vocal parts. The instrumentalists perform the expansive gendhing “Kombang Mara” as they might in a traditional setting. However, a composer/musician by the name of Suraji (the rebab player on the recording) totally restructures the piece’s vocal component, normally realized by a single female singer (pesindhen) selecting traditional texts and setting them to rhythmically independent melodic formulas. What Suraji does is to orchestrate two independent sindhenan lines by assigning each pesindhen a unique series of texts set in macapat versification and specifying the placement of each line of text over the course of the twenty-three minute performance.

…. The remaining three selections on the recording are basically conventional performances of traditional gendhing.

…. a valuable addition to the central Javanese gamelan discography, especially enhanced by the “insider” commentary provided in the liner notes by Pak Sumarsam. The performers are professionals, and, since they were recorded in studio and with the use of numerous microphones, the sound quality of the recordings is excellent.

Notable is the opening track, ‘Gendhing Parisuka’ by Martopangrawit, a perky piece dating from the mid-20th century that includes the Western influence of 3/4 time in its opening and closing sections. This lovely composition features a female soloist and male chorus within a gamelan orchestra. Even more charming is the next gendhing, Kombang Mara, a long, sectional work featuring (in a rare occasion for this work) two female singers, Nyi Cendaniraras and Nyi Suparsih. The disc ends with versions of the well known ketawang Puspa Warna done in both gamelan scales: the 7-note pelog and the 5-note slendro. The liner notes include background information by Bapak Sumarsam, a distinguished Javanese musician now residing at Wesleyan, on how the pieces were arranged. An English translation of the macapat texts used within the music is also included.

The works presented on Volume VII in particular are extraordinarily beautiful, a stunning combination of voices and instruments in a performance that is perfectily seamless.  …. I have no hesitation in recommending the complete series for a basic library of world music.  It’s a rich and fascinating experience.

Volume 7 shows more variety and more risk taking, though is still firmly within the Javanese tradition. A 1950s composition by Martopangrawit incorporates passages of triple time in a deliberate borrowing of Western elements, while “Kombang Mara”, with its lovely vocal duet, experiments with songs from the shadow puppet theatre. Finally the difference between slendro and pelog scales is explored in two versions of the 19th century classic “Puspa Warna”.

It is fitting to sub-title the CD “Edge of Tradition”, since it contains non-traditional offerings of some pieces. The element of tempo 3/4 in Pak Marto’s Parisuka is a bit unusual, knowing the composer’s keenness in classical gendhing. As far as I know this is the only piece in which Pak Marto utilized a Western meter.