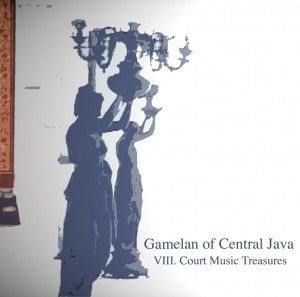 I can see in the beginning of gending ‘Gambirsawit’ the degree to which vocal soloists become an integral part of the ensemble. That piece is perhaps a prime example of Javanese court music at its height, sophisticated, tremendously evocative, astonishingly intensive in places, it provides a perfect beginning to a sequence that builds a vivid image of an ancient culture and its artistic expression. This is a very intelligently structured collection, containing some extraordinarily beautiful music.

The latest releases in the excellent ‘Gamelan of Central Java’ series are welcome additions to the set, but can also be enjoyed independently.  Court Music Treasures is an inspiring and diverse collection of classical Javanese court gamelan pieces performed by musicians of STSI  [now ISI] (the Indonesian Academy of Performing Arts) on two of the ancient gamelans in the kraton of Surakarta. The pieces demonstrate different facets of gamelan court music, each of them reflecting the beauty and majesty of a bygone era.

‘Gambir Sawit’, the opening piece, is a true gamelan classic, sublime and subtly kaleidoscopic like a continuously opening flower. Stately tranquility, with soulful voices weaving in and out of gongs and chimes, yields eventually to a lively and capricious mood.  ‘Mandulpati’, too, creates a feeling of timelessness, like moonlight on flowing water.  ‘Dhenggung Turulare’, however, is like the workings of a celestial clock, becoming ever more tightly wound.  In all, this is a fine collection of essential recordings for gamelan cognoscenti and novices alike.

The playing and recording have been top-notch throughout the series, but volumes since VII include exemplary attempts by Wesleyan professor Sumarsam to explicate gamelan structure and practice for non-practitioners. Something addictive in Indonesian music makes it popular for serialization but the depth here is novel; the most visible precursors, from Nonesuch and Folkways, gathered breadth.

This CD is meant to complement the sixth Volume (‘Kraton Surakarta’) in the series ‘Gamelan of Central Java’. Both CDs do not try to simulate the ways in which gamelan is practiced in a typical klenengan (traditional gamelan playing) – following prescribed modal (pathet) and mood progression – rather, it is a selection of “classical” court style pieces, each to be appreciated on its own.