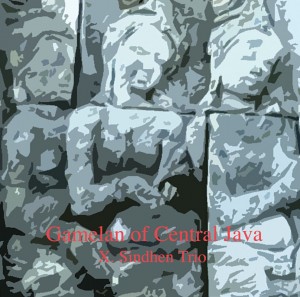 Budheng-Budheng as presented on this disc is a revision of a classical piece dating from the late eighteenth century. The major innovation in this revision is that the sindhenan, the solo part, normally indeed a solo, has been re-composed for three singers, each following a separate vocal melody. If this sounds like a recipe for chaos, rest assured: it is a richly textured work, both ethereal and majestic, and those passages that are in fact sung by a single soloist appear in high relief by contrast. It also builds a subtle momentum that is so immediate that one needs to back away for a bit to recognize it. Like so many gamelan it’s tremendously evocative, image-laden music and at just over thirty-three minutes, by far the longest piece in the disc.

The instrumental Sawung Galing is a low-key piece, also highly evocative, in this case, strangely enough, of silence…  the kind of silence that one hears in the world in the hour before dawn, perhaps, or just after a rain, when the world is at its most quiet.

Kembang Kacang begins as a seeming continuation of Sawung Galing, but the vocalists soon make their entrance and infuse a much higher level of energy into the music. The ‘revision’ of this piece includes the introduction of triple time into the last section. There is a layered effect in the vocals, as soloists and chorus weave around and through the instrumentals, leading to some tremendously engaging details: at about the halfway point there is an unaccompanied solo passage that is startling in its clarity… It’s fascinating to listen to.

The disc is accompanied by commentary by Pak Suraji, who recreated the vocal works. A note of warning: the comments are heavily laced with Indonesian music terminology. You’ve been warned.

One should be aware that this series does not reflect the priorities of an ethnographer but rather those of an aesthete.
This series is perhaps better approached as a curiously and at times problematically collaborative endeavor between excellent musicians and a well-meaning, if sometimes misguided, producer – as an example of a musical phenomenon that is itself worthy of further ethnographic investigation.