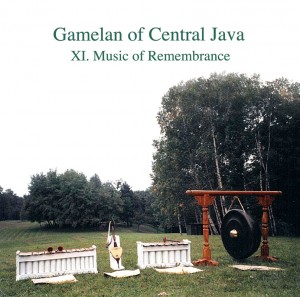 The act of producing an audio recording inescapably involves making decisions that, if nothing else, frame how the music is presented. In the case of Yantra Productions, however, the unusually active role taken by Manis approaches that of a popular music producer – though the spirit in which he assumes this role is perhaps more analogous to the owner of a private contemporary art gallery.

This volume of the series Gamelan of Central Java presents an interesting conundrum: in a cultural tradition that has ideas of death, dying, and commemoration that differ radically from those we in the West hold, what is music suitable for remembrance? In the West, this almost invariably means music of a somber nature, a certain gravity suitable to our notions of respect for the dead.

In Java, the idea of “remembrance” can cover a wide range of music. The opening piece on this disc, Layu Layu, does, indeed, fit some of our Western conceptions — the text reads “Let us hasten following those who are sad on the way to Patunon temple to pray for the loss of our princess. . . .” The music itself is quiet, reflective, and comes close, perhaps, to what we might experience in a memorial service when the soloist sings “I pray for your safety, that you may be free of all obstacles.” It’s a brief piece, serving to introduce a mood. Lagondhang, which follows, sustains the mood in a prayer for peace from the cares of earthly life.

Wilujeng, according to producer John Noise Manis, is often played for a musician who has passed away. It is also played as a welcome, and was reportedly commissioned by a minister for the wedding of his daughter. With that degree of ambivalence, it’s not really surprising that the music itself departs from the mood of the preceding works, and while not exactly lively, it is certainly not pensive. In fact, it lends itself to a broad range of readings, although in this performance there is an underlying feeling of peacefulness.

The next track is a combination of works, Tlutur played in three different modes, punctuated by Panjangilang. This is a deeply philosophical set, the words leading into thoughts on the meaning of life, our purpose on earth, lost love, and being alone in the world. Reading the text, one is struck by the contrast between this and most Western songs of remembrance, especially those liturgical works that dwell on the glories of the afterlife — or the horrors, for those who transgress. Yes, God is mentioned here, but is not central — the core is life, not death. This one, in its several variations, becomes very rich, building the kind of intensity we might find in a “Dies Irae” without the terror of retribution.

The final work, Laler Mengeng, is another instrumental, surprisingly close to contemporary American music in feel, that, according to Manis, does convey the feeling he was attempting in the collection overall. It is, again, thoughtful, understated, although my Western ears can’t really detect any sense of melancholy or sadness — the music seems, if you can imagine it, once more of a philosophical bent, giving rise to thoughts of large questions without the benefit of a text to lead the way.

It would have been interesting to hear what the Javanese think of as music of remembrance, but as Manis points out in his essay, when he asked, the answers were, to say the least, ambivalent. It’s a sobering thought, listening to this album, that perhaps there is a huge gap between our understanding of death and survivorship (for, to be sure, remembrance is as much about those left behind as it is about those who have gone on) and that of other lands.

It wasn’t – isn’t – easy to find out what the Javanese equivalent of the Western idea of ‘music of remembrance’ could be. In the Western culture – leaving aside the ‘funeral music’ that historically has accompanied official ceremonies in certain national and regional areas – the notion of remembrance music generally calls on pieces of the classical repertoire that are somber in character.