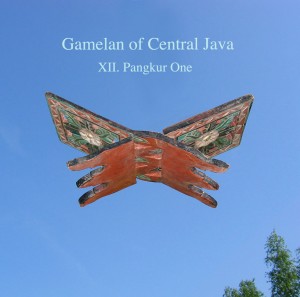 This pair of recordings represents another distinct high point in the Felmay series. Here it concentrates on many versions of a single piece, illustrating just how varied the Javanese conception of a single piece of music really is.

Pangkur One presents what is referred to as the “larger” form, with full gamelan orchestra and soloists. Reading the notes to these selections by noted Indonesian musicologist Bapak Sumarsam, one realizes that one of the key components of Javanese music is density… This becomes apparent in the first Ladrang Pangkur, as the music moves from dense orchestral textures to very lean solo passages, accented again by the changes in tempo… The second Pangkur embraces a very different mood, almost festive at the beginning. There is an amazing complexity to the music that maintains a rich underlying texture in the instrumentals as the piece progresses. The interchanges between the soloist and chorus are engaging, the long vocal lines adding an overarching coherence to the piece…  And yet another shift in mood introduces the third version, slow, almost pensive at first, but rapidly moving into a livelier, more percussive section. Changes in rhythm mark this song, although they are apparent throughout the collection, but here they seem to be more prevalent and more obvious…  The last selection features a new vocal part, sung by a mixed chorus, which adds yet another variation to the basic Pangkur. This one is strongly reminiscent of other gendhing I’ve heard, with the same combination of liveliness and stateliness that marks so much of the Javanese music in my experience. Once again, the variations in density and tempo prove very engaging, often throwing the contrasts between soloist and chorus into high relief.

The commentary accompanying this disc is of limited use to those not familiar with Javanese musical terminology — the notes are, in fact, fairly hard going, at least until you can keep a few basic definitions in your head.

Pangkur is the keystone of the repertoire of central Javanese gamelan, a tune that anyone acquainted with the music is likely to meet week in week out. It is ubiquitous because it can be played in myriad different ways by varying tuning, mode, instrumentation, rhythmic style, vocals, and so on. But do you really need two whole CDs of it? That’s a lot of Pangkur! There is beautiful music on both, but the point seems to be more to educate than entertain.

Javanese gamelan has become increasingly familiar , and its influence upon Western music is widespread. Still, it’s tempting to view it as a timeless sound, caught in some endlessly repeating trans-historical loop. The latest volumes in this marvellous Felmay series of recent recordings go some way towards rectifying that impression. They catch the current state of an evolving classical repertoire, giving prominence to the vocal dimension of that tradition. This first volume [of Pangkur] uses the full gamelan orchestra.

Composing gendhing (gamelan composition) is a complex and heterogeneous process, involving multiple systems and consideration of musical idioms of different parts of the ensemble. The complexity is compounded by the different ways a composition is made according to its genre: gendhing bonang, gendhing rebab, gendhing sekar, and so on.